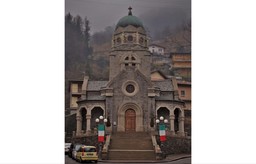 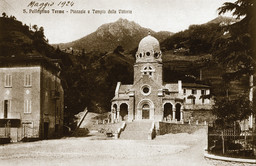 The idea to build a place of worship in honour of the fallen of the Great War originated in 1919. To the credit of the town, they decided not to put up a simple war memorial but, instead, a proper church, to replace the old St Carlo oratory. The project was assigned to the architect Luigi Angelini. After laying the first stone in 1921, the temple was consecrated in 1925. The layout is a Greek cross; the dark stonework gives an air of solemnity while the eight statues on top of the dome symbolise war and victory. The architect was inspired to use medieval designs by the idea of austerity and being able to perpetuate the memory of the dead.
Following the recent restoration (completed towards the end of summer of 2017), thus enabling the visit of the memorial, the interior, resumed again to former glory, are very exquisite with mosaics from the 40s and a series of Biblical and war scenes. Later, it also became a memorial to the fallen of the World War 2.